Postal notes in collectible condition are usually worth between $150 to $2,000.  If you have a postal note to sell – then please tell us about it: info@papermoneybuyers.com 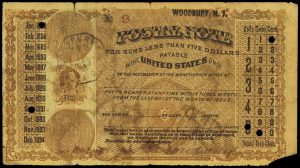 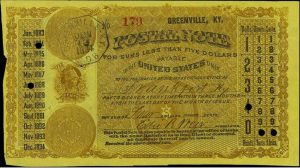 Most all postal notes have the following text:

United States of America Postal Note For Sums Less Than Five Dollars
Payable In The United States Only To The Postmaster Of The Money-Order Office At
Pay To Bearer At Any Time Within Three Months From The Last Day Of The Month Of Issue.
This Postal Note is also payable to bearer at the office of issue, with the same limitation as to time.  If lost or destroyed, no duplicate thereof can be issued
Received the above named sum.